In appreciation of the effort and scientific production, and to encourage researchers to conduct and accomplish research that serves the community in all its institutions and segments, Al-Baath University today honored a number of its distinguished researchers in several fields:

Dr. Abdul-Basit Al-Khatib, President of Al-Baath University, stressed the importance of honoring and supporting Syrian researchers and publishing their research in internationally refereed journals, which contribute significantly to raising the classification of Syrian universities according to the Web Matrix ranking website, in addition to supporting a culture of innovation and idea-making, which contributes to solving humanitarian and societal problems. It develops the scientific research system, achieves the vision of the Ministry of Higher Education and Scientific Research, creates real partnership with the economic, social and development sectors, and links the university with society and the labor market.

Dr. Faiq Shadoud, Secretary of the party branch at the university, pointed out the need to motivate young researchers, graduate students and faculty members to scientific research, especially at this stage, and to choose research related to society, which is concerned with developing the technical and productive sector, and to implement it in practice, to contribute to the service of our country and mitigate the repercussions of the imposed economic blockade. Therefore, praising their efforts and keenness to publish their research in internationally refereed journals, which will positively reflect on raising the rating of Syrian universities.

The researcher, Eng. Moaz Adnan Al-Mohammed Al-Sheikh , pointed out that he did the research in an absolute manner at Al-Baath University, under the supervision of Dr. Akram Al-Marei, The two researchers obtained an intellectual property document Copyright from the publisher IEEE registered in their names and for the benefit of Al-Baath University, and it is the first research registered in IEEE for the Department of Computer Systems and Networks Engineering,

The research falls within the axis of “Network Protocols Development”, where the researcher designed a new algorithm for the development of the multi-path dynamic address routing protocol MDART, and programmed and implemented it in practice. such as packet delay rate, packet delivery rate, and routing packet load, In the process of developing the protocol, the researcher also targeted cities and environments with weak infrastructure in communications and computer networks, as he presented an inexpensive and economically feasible successful algorithm, which also highlights its importance in cases of natural disasters such as earthquakes, fires and hurricanes, as well as assisting civil defense teams and refugees.

The researcher, Engineer Ahmed Samir Al-Saleh , pointed out the importance of his research in improving the properties of asphalt mixtures, which raises their efficiency to resist most asphalt pavement defects (such as cracks, rutting, creep, etc.). It improves the road resistance to high loads, climatic and thermal factors, and all investment conditions for use in transportation and communication projects, especially international roads and airports. Where the research was completed in the laboratories of the Faculty of Civil Engineering at Al-Baath University, documenting the stages of conducting the research and attaching it to the research manuscript.

The researcher, Engineer Ali Yassin , indicated that there are many services of interest to people in general in various areas of life, such as health insurance, banks, obtaining personal documents via the Internet, and other digital services that suffer from continuous attempts to manipulate them and obtain additional benefits from them in non-discriminatory ways. Legitimacy, whether from the real owners of these services or from other unknown parties.

Anomaly detection tools and systems are among the most important means of discovering these attempts, which are represented by a behavior different from the normal behavior according to the concept of these services. At an appropriate time according to the nature of the studied system, and the deep methods depend on modeling natural data first, Then setting the detection threshold to separate abnormal cases from normal, which is a threshold that changes over time due to the variability of normal data and current methods and systems suffer from determining the value of this threshold dynamically according to the change of abnormal behaviors. In the research, a modified method was proposed from the Autoencoder Deep Neural Network, which has the ability to dynamically determine the detection threshold according to the nature of the scenario you are dealing with. He called this method the AEDT, which is an acronym for the following words (Auto-Encoder with a Dynamic Threshold).

An anomaly detection system (AEDT-ADS) was built based on the proposed method (AEDT). By applying it to the financial data of an insurance company, the proposed system was able to detect anomalies (fraudulent operations) with an accuracy of 94%.

In turn , researcher Intisar Ismail She indicated that she began her research seven years ago, and the target group was children from the age of 2 to 17 years, as she emptied mathematics from the entire school curricula and shortened the study objectives for each stage and worked to achieve them in a record time and in an effective manner and modified the arrangement of the educational material to suit people with disabilities And with the superior among them, which contributes to developing their abilities and raising them to the highest level of investment during advanced ages by developing the right side of the brain on which children from 2 to 8 years old depend,

Its program included a practical section and a theoretical section centered on the early detection of developmental difficulties in children so that they do not turn at an advanced age into academic difficulties, the importance of developing scientific material while developing personality and building a relationship with parents, a special axis for children with visual impairment from the beginning of life to an advanced age and the development of the blind socially Behaviorally and educationally, and providing them with mathematics in a way away from Braille and providing them with engineering concepts, in addition to providing mathematics for children with autism, Down syndrome, hyperactivity, developmental motor delay and mental delay through the magnetic abacus device, which contains sensory, visual, tactile and kinetic indicators that help build mental processes and their development Language skills, perception, attention, memorization and memory, which have a major role in establishing mathematical information.

The honoring was attended by the university’s vice presidents and deans of the faculties of informatics and civil engineering at the university. 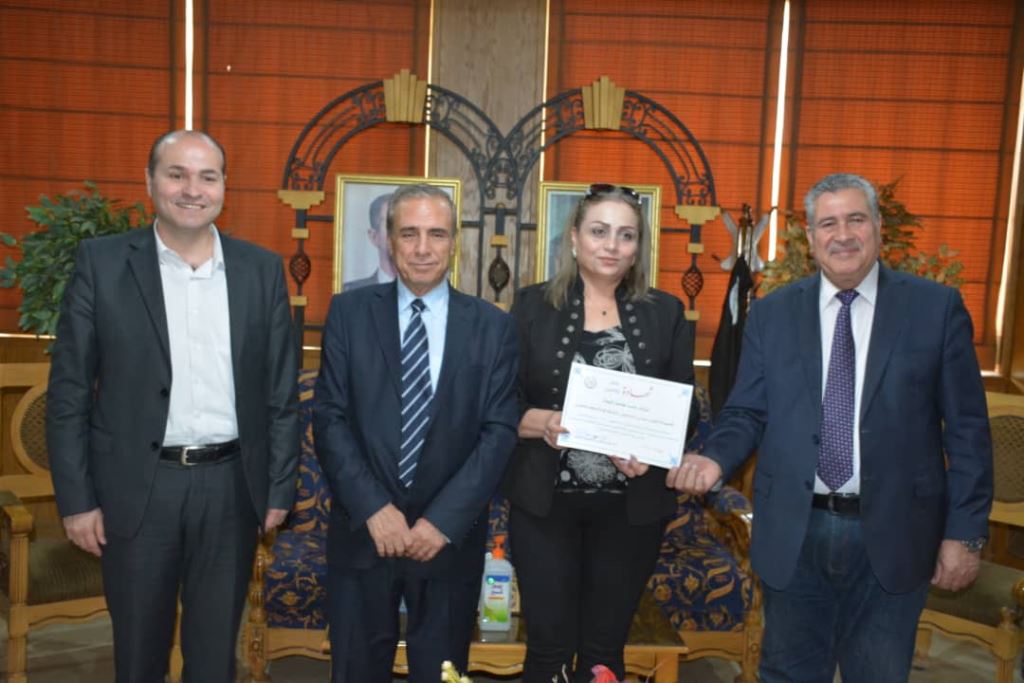